Compare the Honda Civic GX to the hybrid Civic

Why buy the CNG fueled Civic GX instead of the hybrid Civic?  Because after the Oklahoma and federal tax credits, the CNG GX is thousands cheaper and the fuel costs are cheaper than the hybrid Civic also.

Mayor Bloomberg calls it like it is on "Meet the Press"

The mayor of NYC was on "Meet the Press" this past Sunday.   Unfortunately, the rest of the group didn't pick up on the Mayor's comment - they preferred to keep talking about how everyone "feels"....


Mayor Bloomberg: [I]t is the battle on the battlefield, but it’s also the battle on the economic field. And what’s missing here is a discussion, believe it or not, of the environment. And it has nothing to do with global warming down the road, it is today.
We are transferring our wealth to countries around the world who don’t agree with us and, in many cases, are funding the very terrorists that we’re sending our young men and women out to fight. And sometimes they don’t come back or they don’t come back alive.
We can’t keep doing this. We’ve got to get, somehow or other, energy independence. And so regardless of whether you’re a greenie or not, the bottom line is we cannot keep funding our enemies.

America can shift a major portion of its transportation fuel from imported petroleum to domestically supplied natural gas NOW.  This would cut America's funding of other countries and would improve our environment here.  I know this is possible because I prove it everyday I drive the Honda Civic GX.
Posted by Craig at 10:06 AM No comments:

Grocery-getting test for the GX

Will all these groceries fit in the small trunk of the Honda Civic GX (because the CNG tank takes up half the trunk)? 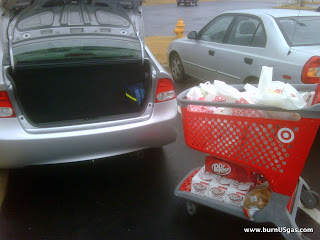 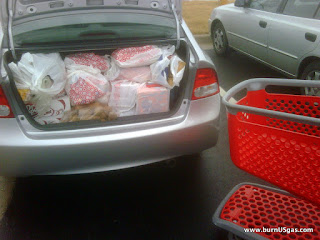 Gas could be the calvary in keeping America financially solvent!

Quoting from this widely distributed AP article - "Gas could be the calvary in global warming fight":


An unlikely source of energy has emerged to meet international demands that the United States do more to fight global warming: It's cleaner than coal, cheaper than oil and a 90-year supply is under our feet.
It's natural gas, the same fossil fuel that was in such short supply a decade ago that it was deemed unreliable. It's now being uncovered at such a rapid pace that its price is near a seven-year low. Long used to heat half the nation's homes, it's becoming the fuel of choice when building new power plants. Someday, it may win wider acceptance as a replacement for gasoline in our cars and trucks.


Someday?  It just replaced the gasoline consumption of my Mazda3 when I bought the Honda Civic GX.  The natural gas producer executives keep looking to incremental gas consumption to generate electricity instead of coal fuel - seems they don't believe that the American consumer will switch to a cheaper fuel for their transportation.  Coal is not the enemy - OIL IS!  We don't import coal in America, we import OIL.  Oil consumption is the fuel that needs to be replaced, not coal.

And it's so easy to do - the Honda Civic GX cost $400 less than the comparable LX (after federal & Oklahoma tax credits) and thousands less than the hybrid Civic.  My fuel cost? Less than 4 cents/mile. - Craig

Fueling up my Honda Civic GX around Tulsa

Here's a short video of my fillup at TGT's 51st & Mingo location:


See all the CNG filling locations at cngprices.com

Almost to a 1,000 miles on the Civic GX - I'm loving this car so far.  Mark Sprowls at Joe Marina Honda said he's got two cars available if you want to buy one before the end of the year so you can get the tax credits on your 2009 tax return.  - Craig
Posted by Craig at 9:31 PM No comments:

Tracking the cost of the Honda Civic GX fuel

I've started a mileage log in Google Docs. The first thing I noticed is that since the ONG station only supplies 3,000 psig gas and the TGT station supplies 3,600 psig (which is about 20% difference in capacity), my gas mileage from fill to fill will vary quite a bit. So it's the average mileage over several fills that is useful.

The only disappointment with the car so far has been that I could not drive it to Terrell, TX because there are no filling stations along the Indian Nation Turnpike...

Here's the link to the whole gas mileage tracking spreadsheet.

Craig
Posted by Craig at 9:22 PM No comments: