Tulsa & the Texas Triangle in the CNG Honda Civic

The emergence of CNG stations along the "Texas Triangle" has been reported recently. This past week I needed to be in Houston and San Antonio, so I decided to take the 2012 CNG Honda Civic on a tour of the Texas Triangle to prove whether the stations are prevalent enough. Note that the Civic holds 8 gge of CNG and no gasoline (called a "dedicated CNG vehicle"). 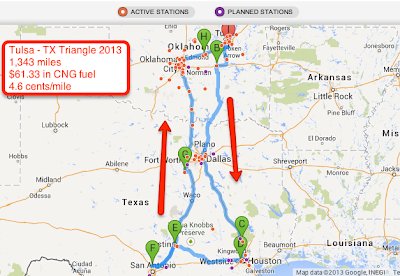 This map shows the route I chose.

I discovered on this trip that the mileage of the 2012 Civic is phenomenal - I achieved 44 mpg on the leg from Tulsa to Dallas averaging 65 mph.  The lowest mileage, 37 mpg, was on the Austin to Fort Worth leg - I was ready to get home averaged 75 mph.

I'm searching for a metric that illustrates how the CNG Civic is the cheapest, fastest way to travel.  While a Chevy Volt or a Nissan Leaf can recharge for minimal cost like a CNG Civic, it takes hours of time every 80 miles or so. The fillups in the CNG Civic take less than 5 minutes and I'm back on the road driving the speed limit (not 55 mph in an attempt to extend the range).

Called into KRMG's Wheels show Saturday morning - here's the audio of that call.

I'll end this post with photos of the various CNG stations.